How to set up a network camera steps

Network cameras (a.k.a IP cameras) are gaining popularity rapidly among consumers due to their ever-improving quality, features and declining prices. An HD network camera that normally cost over $200 in 2012 can be bought under $60 in 2016. Traditional typical users of network cameras are enterprises that have professionals for installation and maintenance. Many consumers choose the DIY approach to set up their cameras. This article is meant to help these users. It by no means can replace the help from professionals that is needed for a variety of reasons – complexity of a video surveillance system, user lacking required basic computer/network knowledge, demanded expedition…

There are literally thousands of models of network cameras in use. It is impossible to have a set of instructions fitting every model perfectly. We use a popular model (M1034-W) by the network camera inventor – Axis – in this article. The setup steps for the vast majority of other network cameras are either identical or very similar to the ones described here.

A word about ONVIF. Detailed explanation about ONVIF is beyond the scope of this article. An average user may only need to know that ONVIF is an international standard. An ONVIF conformant camera offers the maximum compatibility and interoperability with many software and hardware on the market. Generally speaking, ONVIF conformant cameras have more features and better quality than traditional non-ONVIF network cameras.

For this article, we assume the reader has very basic computer and network knowledge. Technically savvy users may find many parts are too rudimentary for them.

Enable ONVIF Services (for some models of Axis).

Some ONVIF cameras (e.g. some from Axis) have ONVIF services disabled by default. You will need to enable ONVIF as shown by the following figures for Axis 1031-W: 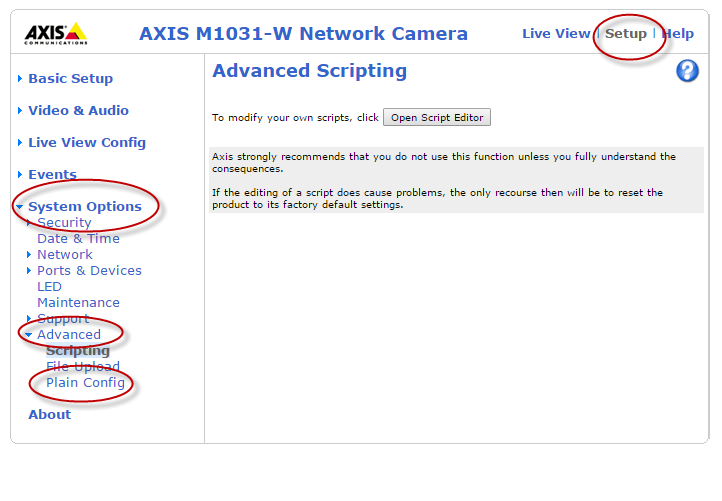 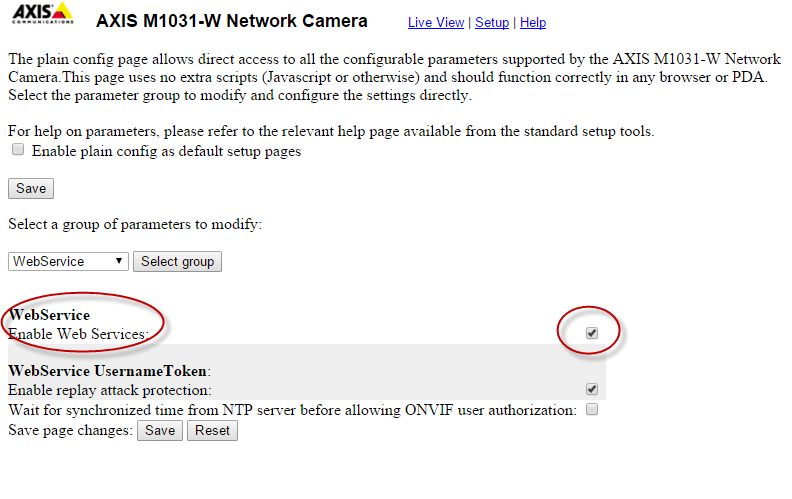 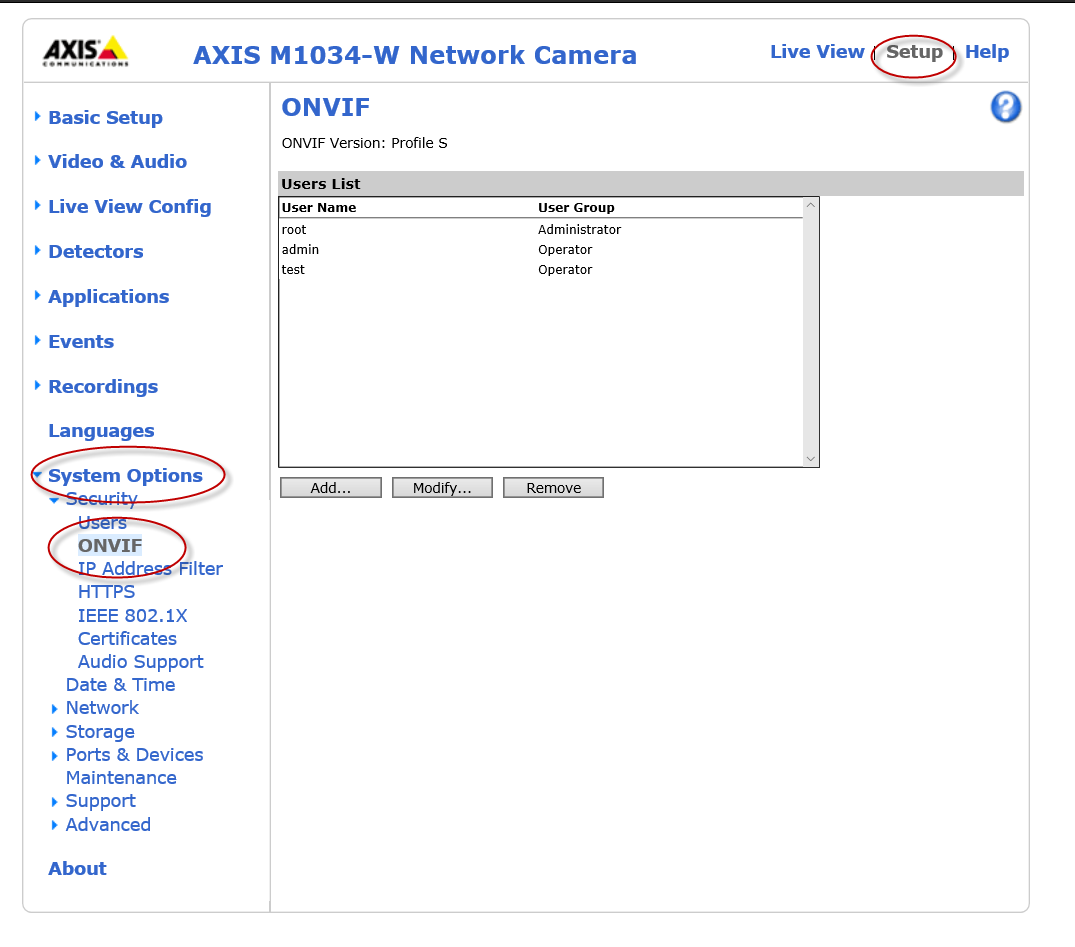 Most users want to access their network cameras outside their LANs (e.g. outside their homes). The next section will explain how to access the cameras via Wide Area Network (WAN) (e.g. via cellular connections). Unless you are experienced with the camera and its configuration, it is extremely important to make sure the camera works on your LAN first. This is because the WAN access will never work if the LAN access does not work. If it works on your LAN, it will be very easy to diagnose any issues with the WAN access.

Many apps have automated the setup process to a great degree, and it usually takes less than 1 minute to set up a camera before starting enjoying its video.

The following is for setting up a camera with apps Onvifer for Android, and IP CENTCOM for Windows 8.1/10 and Windows Phone.

The first step is choosing the type of device for the configuration as shown by the following figure:

ONVIF is the recommended one. Almost all new modern network cameras are ONVIF conformant. Please note most ONVIF cameras can also be used as generic RTSP stream or generic MJPEG. Older network cameras support RTSP, MJPEG, or both.

Once the type is selected, input the few required parameters (e.g. user name, password), the setup will usually be completed in seconds. The following figures show the setup screens for Onvifer, IP CENTCOM for Windows Phone and Windows 8.1/10 respectively: 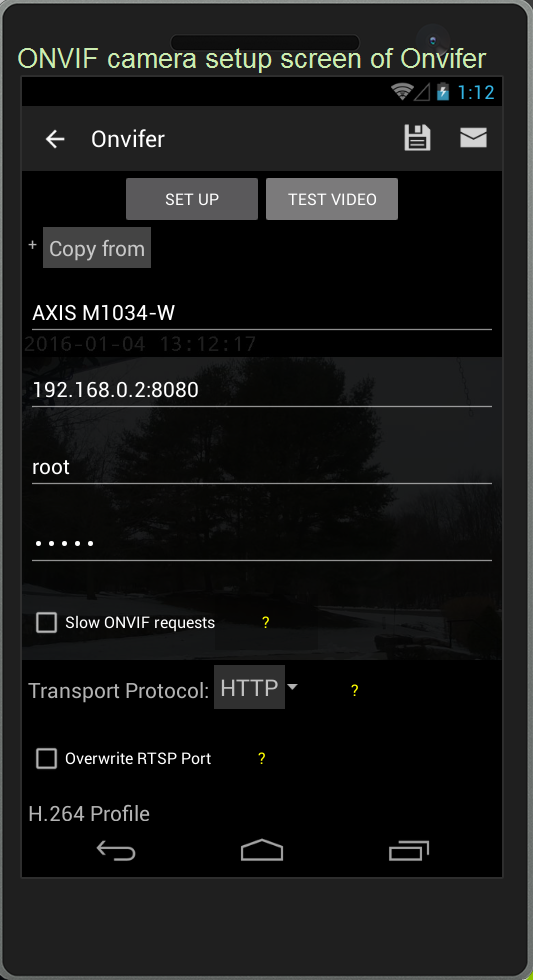 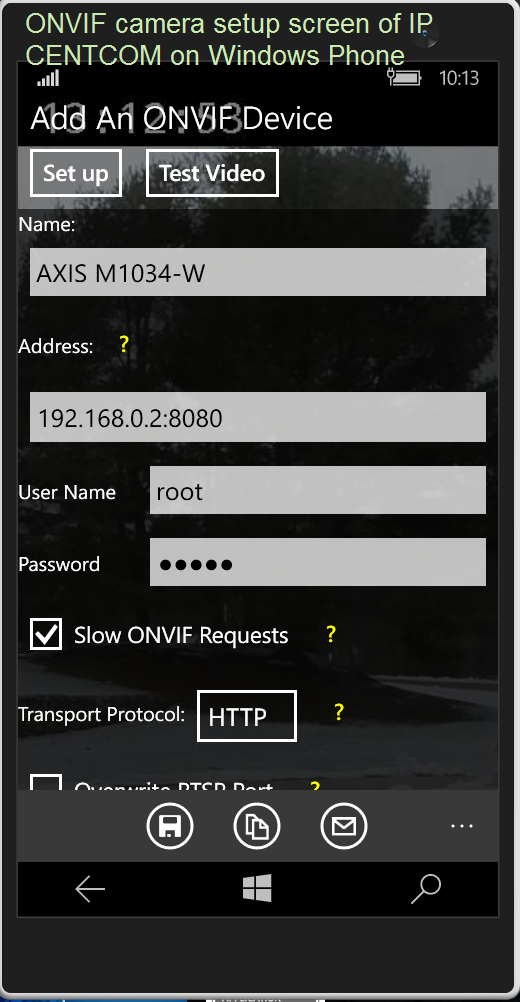 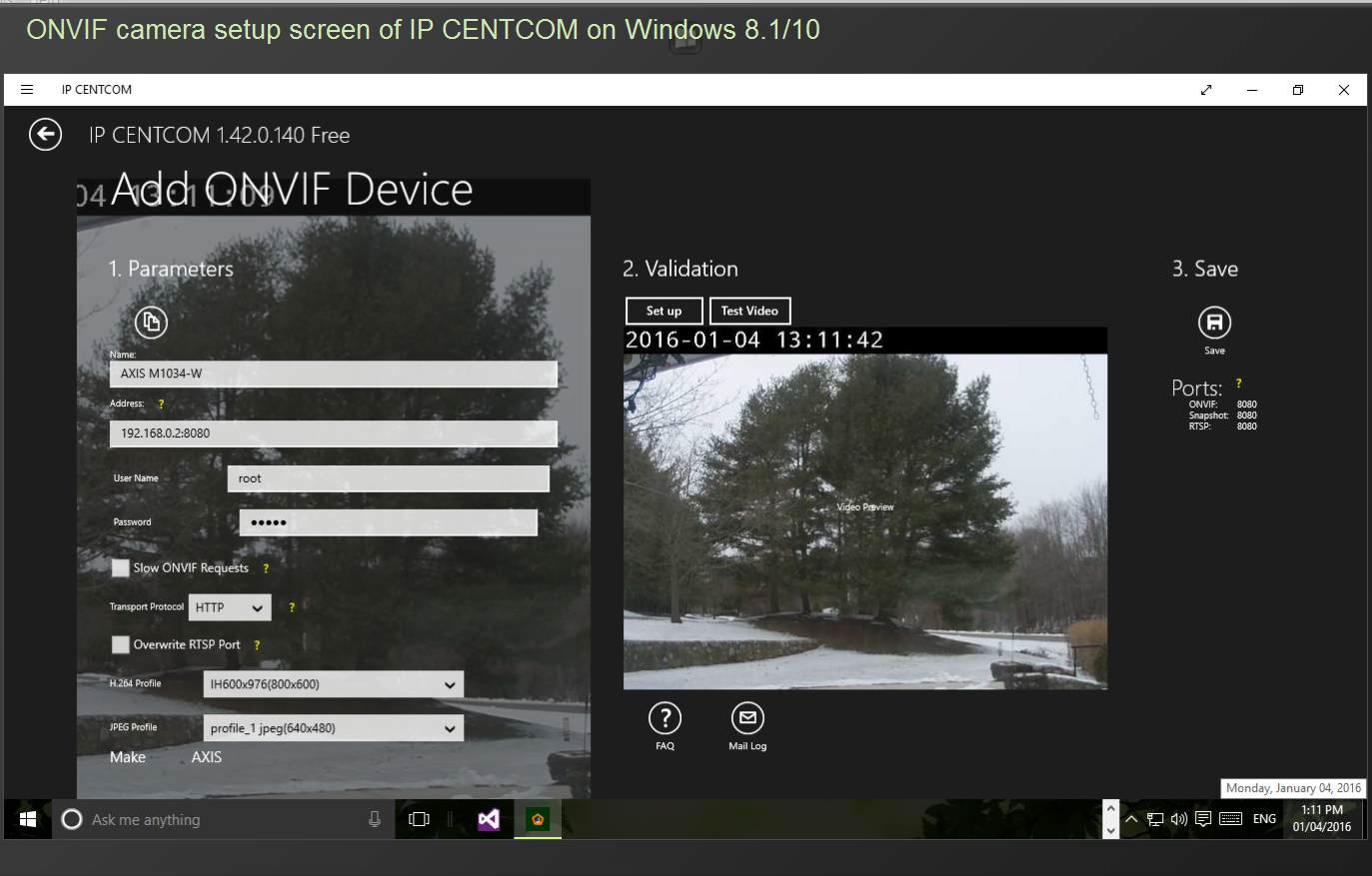 Most users want to access their network cameras outside their LAN (e.g. home network). They may access via a cellular connection, a Wi-Fi hotspot, workplace network, etc. We have received far more questions about this topic than any others.

If you just want to know the quick steps to set up WAN access, please take a look at this post of ours with a few slides.

If you happen to use one of our apps, you can click button WAN Access after the video test on the setup screen is finished successfully as following figures show for Onvifer for Android, and IP CENTCOM for Windows and Windows Phone respectively: 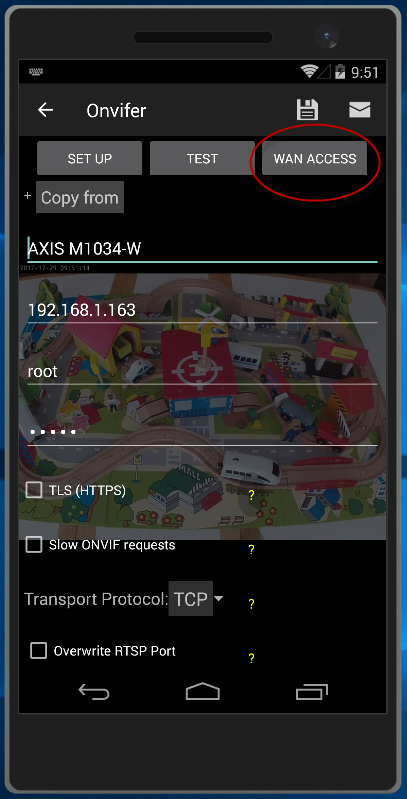 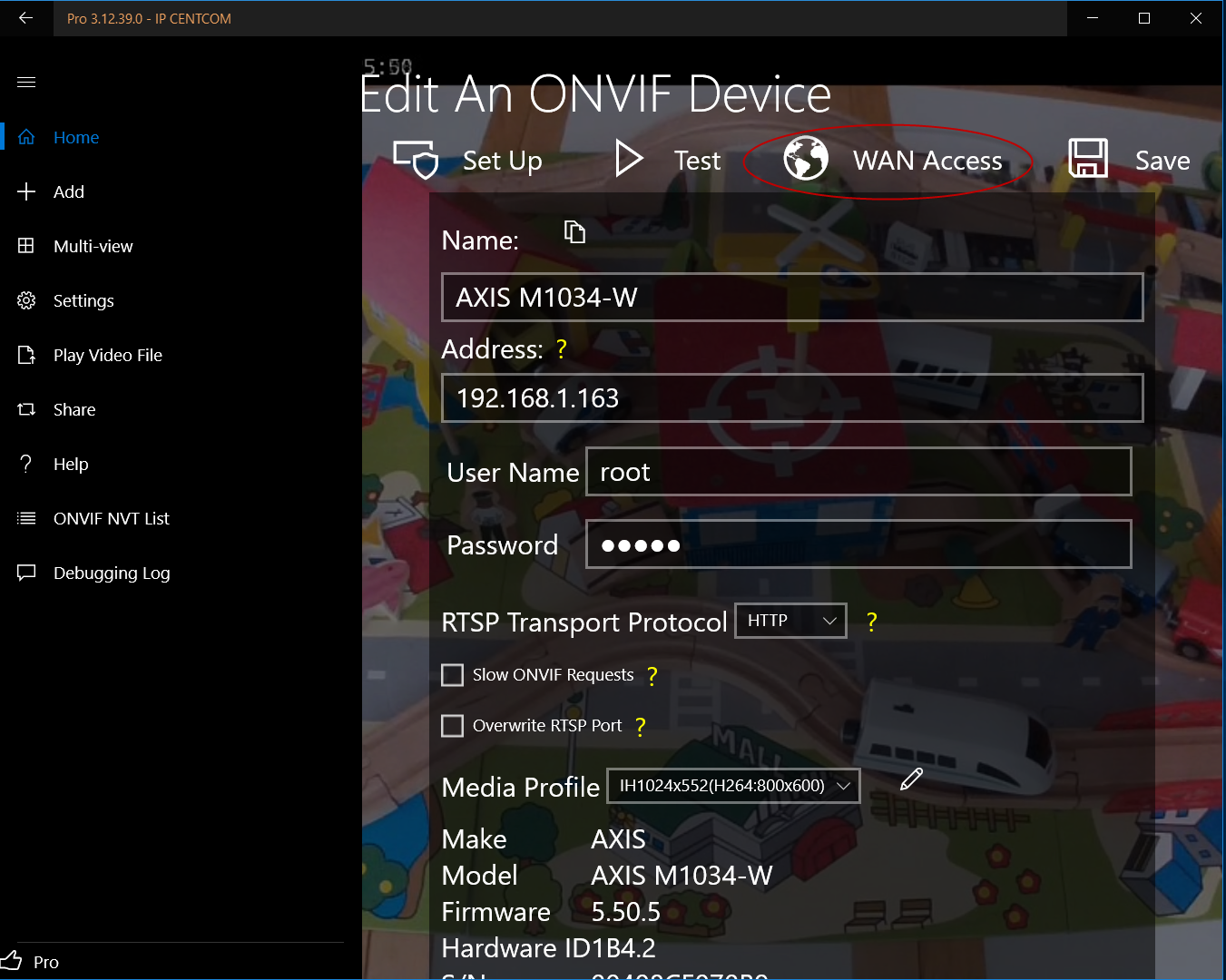 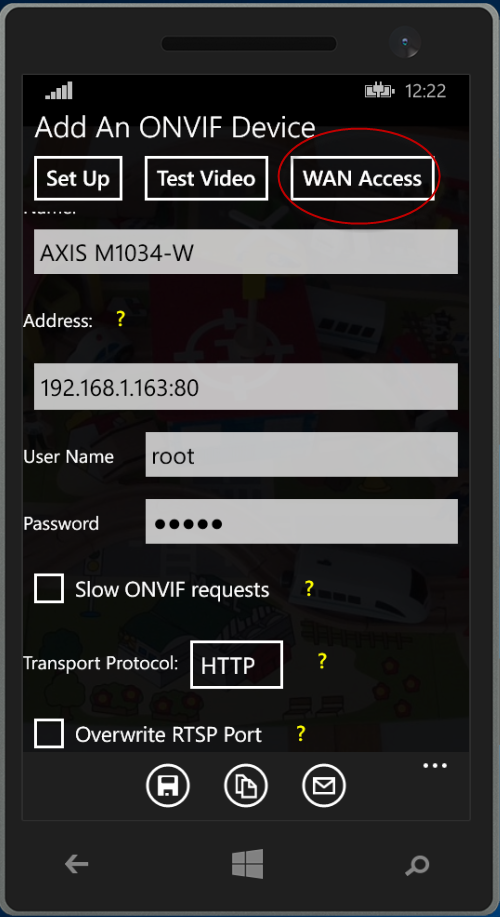 You will get specific step-by-step instructions for the configured network camera as following: 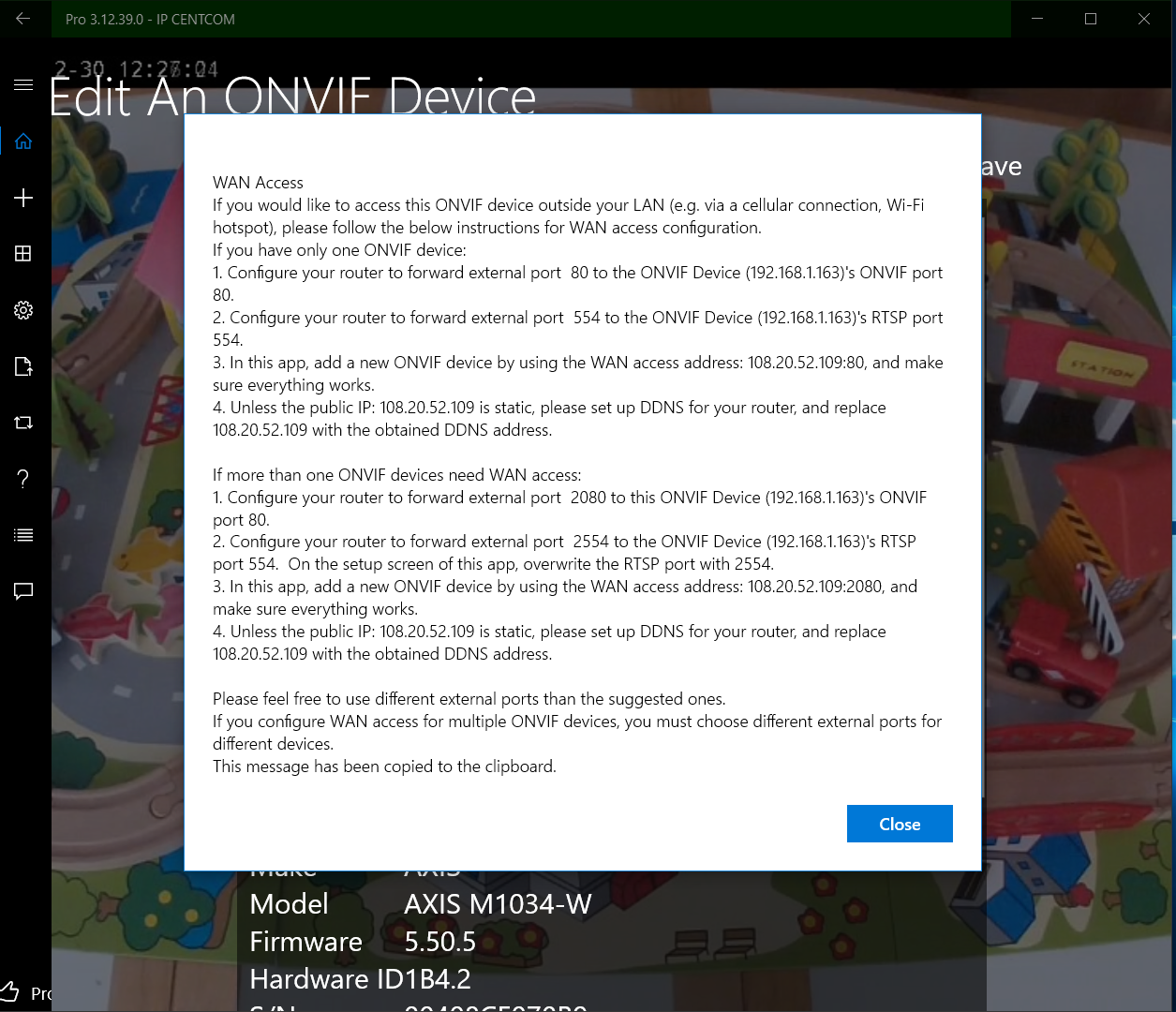 We hope you will read the following to gain fundamental understanding of WAN access configuration regardless of whether you use our apps. It may look daunting to configure the WAN access, but it actually takes only a few minutes to do it once you know how. This section may be a bit long because we try to help you understand the principles behind the process. The specific steps highly depend on your camera and router.

Please note that most instructions here regarding configuring WAN access are NOT specific to our apps. They are applicable no matter which app (including browsers) you use to access your device remotely unless you use technologies such as P2P that maintain a constant connection between your camera and a server of a company that is usually unknown to users.

A network camera may use more than one port (the default port is HTTP default port 80). Each port offers a unique service. For example, one port for web UI, one port for RTSP. Non-technical people can treat ports as doors of a home. You get different services by entering different doors.

Each LAN is behind a router (or gateway), and the router has an IP address and that IP address is public IP address, not a private IP address like that of a network camera though the IP address’s format is the same. Since it is a public IP, the router can be accessed on the Internet anywhere in the world. How do we tell a router that we want to communicate with a specific network camera on the LAN behind it? The trick is port forwarding. 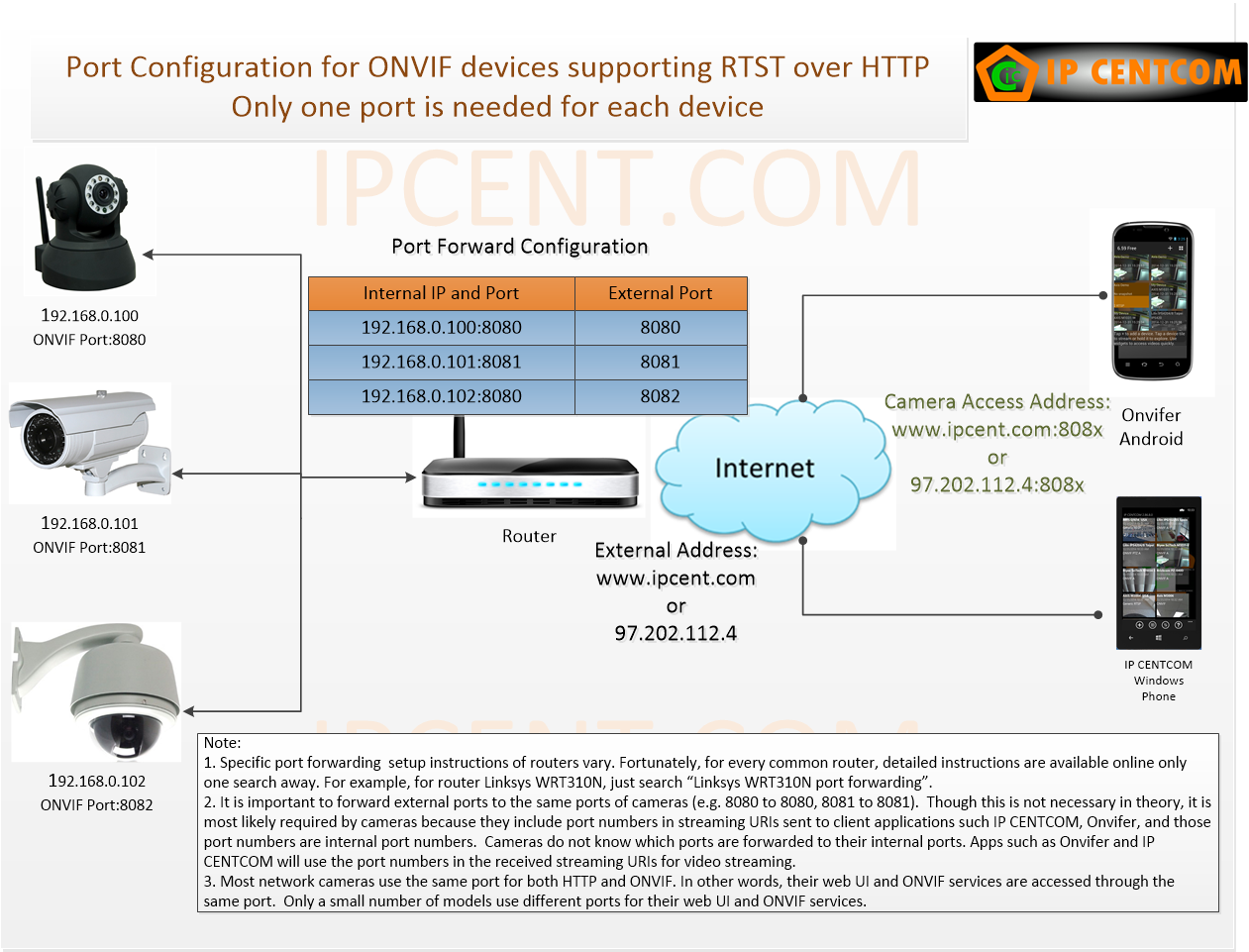 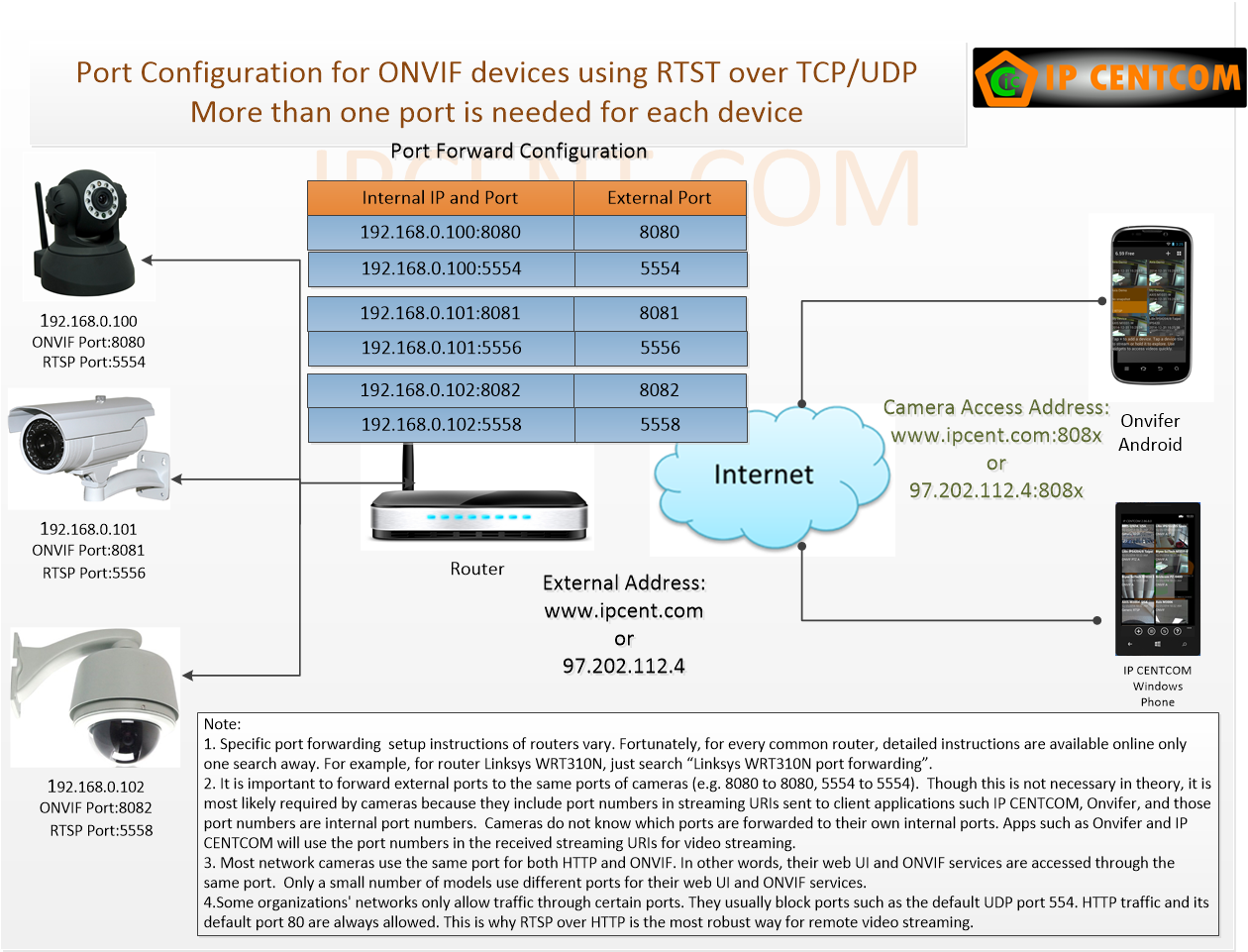 Some cameras do not allow the modification of their ports, in this case you can forward different external ports to the fixed ports of cameras, but it is critical to tell apps to overwrite the RTSP ports informed by the cameras with their corresponding external RTSP forwarding ports (e.g. 5554, 5556…) in apps. This is because the cameras are not aware of port forwarding, so they always tell apps to use their ports. All of our apps support RTSP port overwriting. The following figure shows the port forwarding configuration of this scenario. 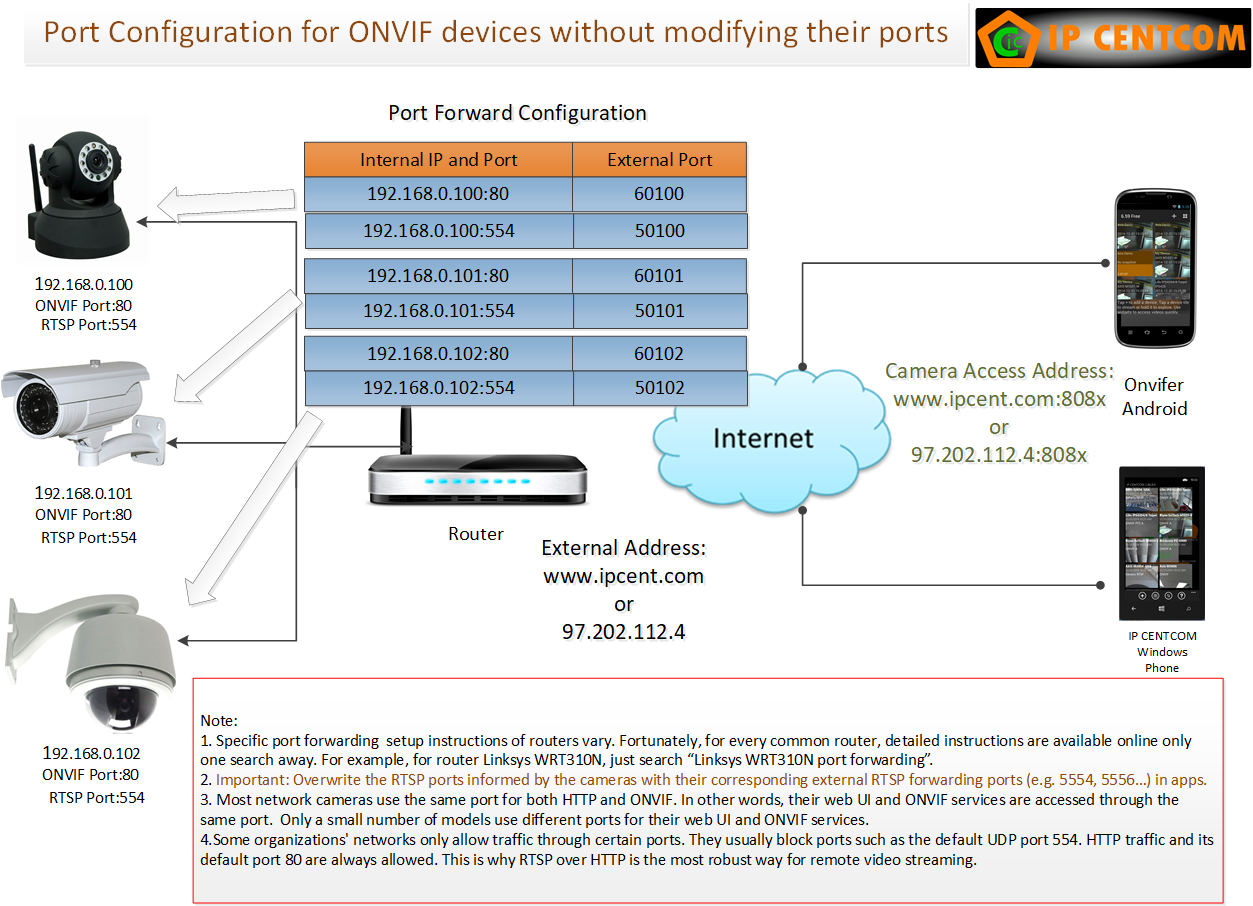 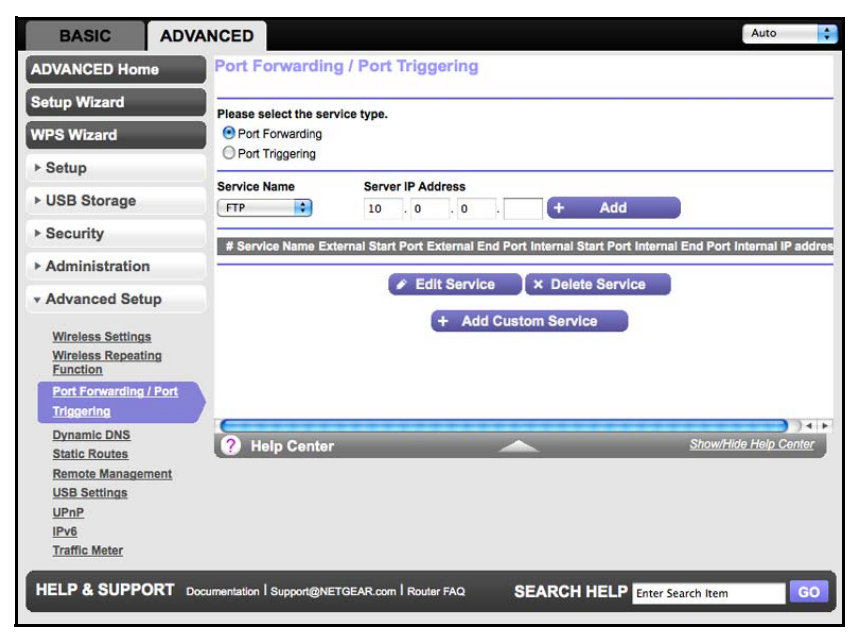 The following represents a more complex port forwarding UI from Quantum Gateway (Fios-G1100). It shows that port 60163 is forwarded to port 80 of an Axis camera following the WAN access instructions of our app. Other ports can be forwarded in exactly the same way.

All network cameras of major brands use one port for everything – Web UI, ONVIF services, RTSP and snapshot because they use only one transport protocol – HTTP. They support RTSP over HTTP. Some cameras, especially many made in Shenzhen, China require up to three ports – one port for web UI and maybe snapshot, one port ONVIF services, and one port for RTSP. 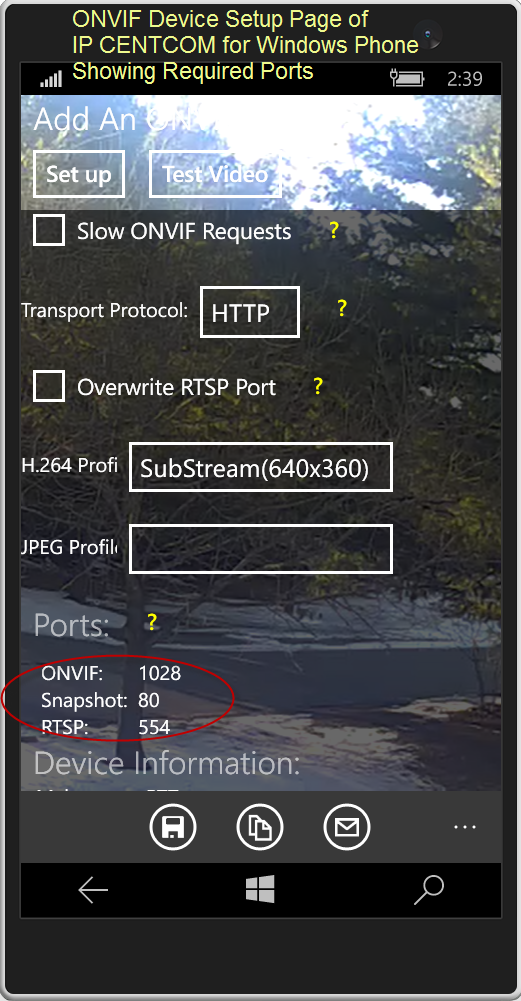 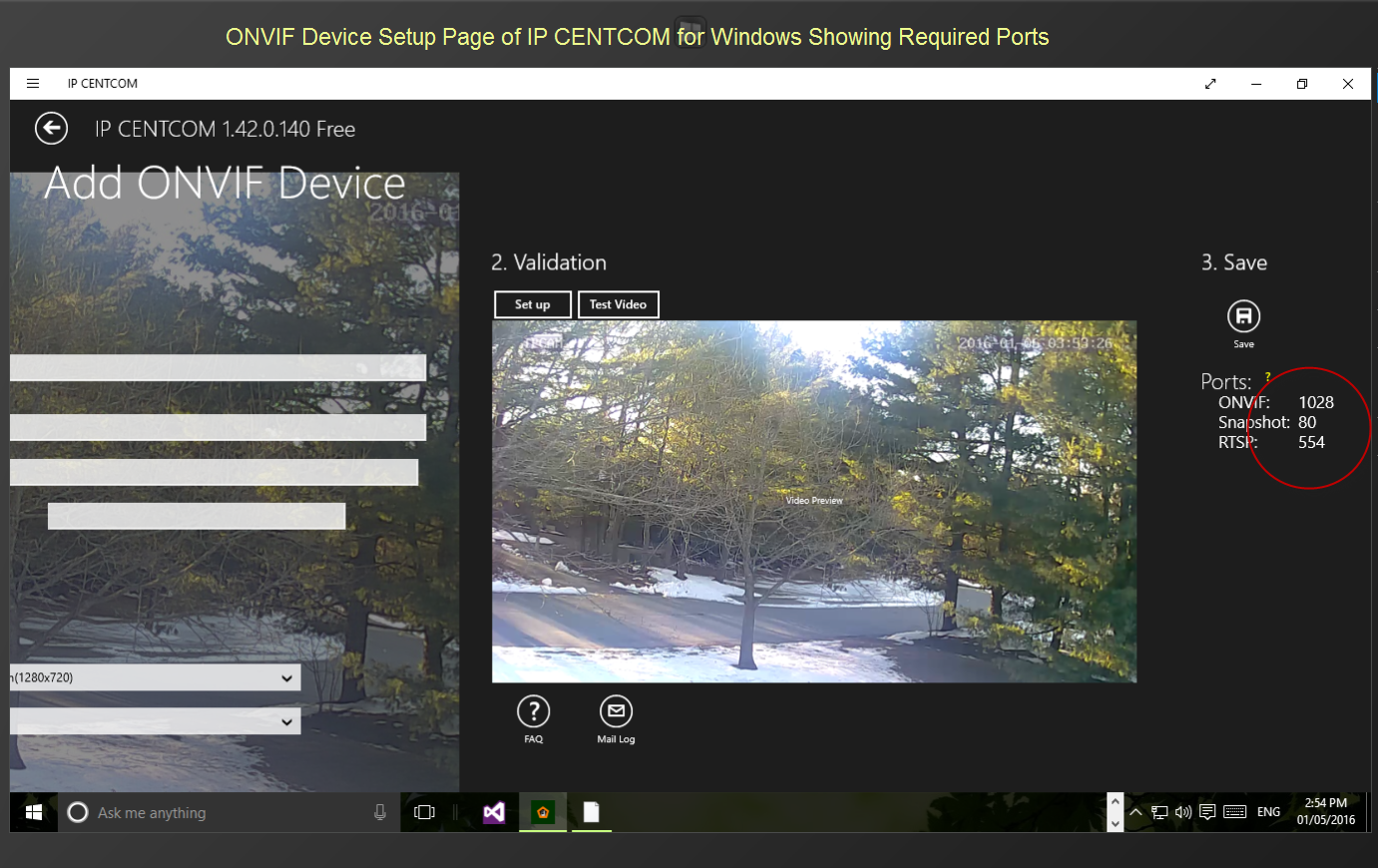 Fortunately, there is a way to deal with this. It is Dynamic DNS (DDNS). The details of DDNS are beyond the scope of this article. For the purpose of network camera WAN access, users only need to know that DDNS offers a static host name (e.g. mycamera.myddns.com) to replace a router’s public IP address, so the address to a network camera remains constant.

When a DDNS host name is used, it is resolved to the dynamically assigned IP address of a router. It essentially tracks the change of the router’s IP address. Many network camera manufacturers offer free DDNS service. One can also subscribe to paid or free DDNS service such as dyndns.org, freedns.afraid.org, dynu.com

All of them use the same mechanism – sending the router’s dynamic IP address to a DDNS server upon its change or periodically. Each DDNS or service or router usually has detailed setup instructions. Some network camera manufacturers also provide detailed instructions for DDNS. Please see the last section “The Axis Internet Dynamic DNS service” of this Axis document for an example.

How to use Google Drive as cloud storage

How to configure Lorex security camera

How to update the firmware for alarm system

How to Setup Intercom with a PBX Server?

How to test a smoke detector (Four Methods)

How to connect a Hikvision IP camera to a Dahua NVR