How to test a smoke detector (Four Methods)

The smoke detector is one of those few devices of vital importance which, after being installed in your house or office can save your life in case a fire breaks out. According to the USFA (U.S. Fire Administration), the majority of deaths caused by fire and smoke inhalation happen in homes that don’t have smoke detectors installed and the direct property losses rise up to almost $11 billion a year, so not having even some basic smoke alarm installed can carry significant consequences. Since all the states have some regulations in place to prevent fire hazards, I don’t doubt that most people do actually have at least one smoke detector installed in your home, but, unfortunately, some of us install it and then forget about it until it either (hopefully) signals the presence of smoke or, in case you have battery-powered detectors, when these batteries are low and require replacing. 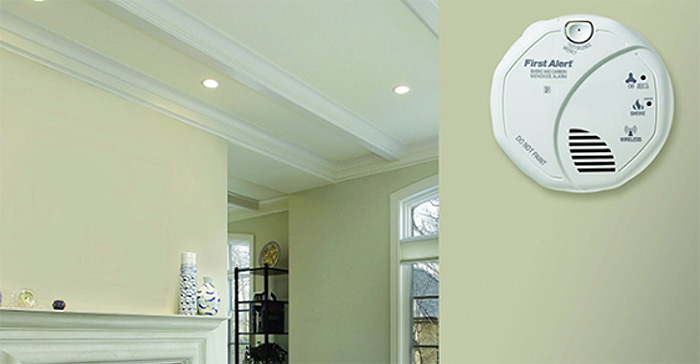 The USFA says that you should test the alarms at least once a month by pressing the Test button from the device and replace any old smoke detectors (usually after 10 years have passed) or any device that doesn’t sound when the Test button has been pressed (it indicates that it no longer functions). Of course, this is a basic method to see if the devices are still working, but there are other, better means of testing your smoke detectors to ensure that they work as intended in case a fire breaks out and we’ll explore some of the most popular ones in this article. But first, it’s important to understand the differences between various types of sensors used by the smoke detectors.

1. Ionization sensor: this type of sensor is very efficient at quickly detecting smaller particles from the fast flaming fires and the technology behind it involves implementing a trace amount of radioactive material (it’s usually Americium 241, a radioactive isotope of americium) and two plates that create an electric field to ionize the air inside a chamber so, in case the small smoke particles enter this chamber and disturb the flow of the ionized air, the sensor will trigger the alarm.

2. Photoelectric sensor: this type of sensor was designed to quickly and efficiently detect the presence of larger particles from slow burning smoldering fires by relying on a light source which is usually positioned at a 90 degrees angle and points away from the sensor; in case the smoke particles enter the chamber, it will scatter the light beam, therefore hitting the sensor and activating the alarm.

3. Dual-sensing sensors: since fires can be very different, it’s difficult to predict which type of sensor would be suitable for a particular situation, so a combination between the photoelectric and ionization sensors has proven to be ideal for quickly detecting any type of smoke inside the house. It’s worth noting that you should also consider a Carbon Monoxide alarm (which uses an Electrochemical sensor) to better ensure the safety of your home – a separate unit can ensure that in case one device fails, at least one more detector remains functional.
Note: If your smoke detectors are connected to a central security alarm system, you need to make sure that you call the company in advance, so they don’t dispatch firefighters to your home.

As I said in the beginning, the most rudimentary way of testing a smoke detector is by pushing and holding the Test button until it starts beeping and then releasing it. If the device doesn’t beep after several attempts, then it’s no longer functional and should be replaced. This method is the most preferred by the home owners, but what does the Test button do precisely?

In the case of smoke detectors with an ionization sensor, the two plates that create the electric field using the radiation will be interrupted when the Test button is pushed, therefore triggering the alarm and showing that the system is still functional in case smoke enters the chamber. In the case of those detectors which rely on a photoelectric sensor, when pushing the Test button, the light beam that shines away from the sensor will be directed towards the photoelectric sensor, therefore triggering the alarm and, once again showing that the system is still functional.

But, this is the ideal case because a very large percentage of smoke detectors don’t actually perform the aforementioned tests, instead they simply check the circuits, such as the sounder or the LED and not touch the sensing chamber which is the reason why in most cases the Test button is not enough for making sure that the smoke detector is in perfect condition (that is unless you are sure that the manufacturer has indeed implemented a proper self testing system).

Note: I know that some people may prefer the no-frills basic smoke detector, but a smart device (such as Nest Protect) does have some advantages in this specific scenario because it runs automatic tests every 200 seconds to check the power, the smoke sensor, the CO sensor and the WiFi; additionally, it also runs Sound Checks monthly to verify the speaker, buzzer and the light ring – you can also run these tests at any given moment.

Method 2: With real fire – Not Safe

If you find the Test button method unreliable (and in some cases it is), the first thought that comes to mind is to test the smoke detector … with real smoke. So, you take a piece of paper, set it on fire and wave it underneath the smoke detector until you hear the beep. There are also some dedicated smoke matches that can quickly make a lot of smoke and easily trigger the alarm. While this method may seem the most reliable, it really isn’t for several reasons. First, you should never start a fire inside your home since it can be unpredictable and can set your house on fire.

Secondly, using this method can easily damage your smoke detector or degrade it over time. This happens especially because of smoke from smoldering fires where the larger particles will cover, over time, the photoelectric or optical sensor. Additionally, if you come too close to the device with your fire source, it can molten and damage the internal components of the smoke detector. So, overall, despite being surprisingly popular, this method should be avoided and instead you should try using smoke cans which takes us to the next method.

Since using real fire is dangerous, you can use aerosol smoke which is simply a can with synthetic smoke that, when released towards the detector, it should trigger the alarm, just like a real fire should. In order to work as intended, the aerosol smoke must be suitable for testing both the ionization and the photoelectric sensor, so the smoke particles should be be between 0.01 and 10 micron to trigger both types of alarms (the ionization sensor is sensitive to particles between 0.01 and 1 micron, while the photoelectric sensor is sensitive to particles between 1 and 10 micron).

Furthermore, another important factor to take into account is is if the synthetic smoke is flammable or non-flammable. Most generic smoke cans are flammable (including the Smoke Sabre Aerosol, which I use when testing my smoke detectors), but I did notice that some brands, such as Solo, does have available some non-flammable smoke cans available. In order to test a smoke detector, point the smoke can towards the detector from a distance between 2 to 4 feet and spray for 1 to 2 seconds. If the alarm gets triggered between 1 to 10 seconds (depends on the device – some have a built-in delay circuit), then you will know that everything is still working fine.

I do prefer using the Smoke Sabre Aerosol due to its extension which is really useful to ensure that I can’t damage the internal components with too much smoke and this highlights a very important aspect of the smoke cans: just like real smoke, they can damage your detector over time. This can happen if you push too much smoke towards the detector and because some aerosols leave oily residue which attracts dirt and, when accumulated over time, can make the detector more prone to false alarms.

This last method closely ties in with the aerosol smoke method since it basically uses the same principle but, instead of pushing smoke from the can towards the detector’s enclosure, you can use devices such as Solo 360 or Testfire which consist of a transparent bowl at the end of a long arm (so you don’t have to climb a ladder): the bowl needs to be placed around the smoke detector and, using the command panel (yes, these devices do have electronic commands), you can release a certain quantity of smoke inside the recipient, therefore keeping everything a lot more contained; you do need to know that Testfire and Solo 360 rely on proprietary smoke cartridges instead of allowing you to insert a regular smoke can.