What is RTSP protocol in CCTV systems

What is the RTSP protocol?

RTSP stands for Real Time Streaming Protocol, a network protocol for streaming the videos in real-time. Basically, it’s designed to send audio or video live from one device to another. This protocol was not created exclusively for CCTV, it was already used in other sectors where there is a need for real-time transmission and was adopted by video surveillance device manufacturers and became a standard protocol.

Video surveillance manufacturers implement the RTSP protocol on their cameras, recorders, and software so that they are compatible with other devices that are available in the market. When purchasing an IP camera and a network video recorder from different manufacturers, you can have them communicate using this universal protocol. To configure the equipment it is necessary to find out which RTSP command should be used and this information can be found in the product’s manual or by consulting the technical support team.

How to use the RTSP protocol

Let’s say you have purchased an IP camera from Dahua (a well known Chinese manufacturer) and you need to use it with a network video recorder (NVR) that you already own, but it is from a different manufacturer, such as Samsung. You should search the Dahua’s camera manual for the RTSP command that should be used to stream video over the network. If you do not find this information in the product’s manual you should contact the manufacturer technical support team and ask them for the RTSP information required so the equipment can communicate with each other.

After obtaining this information, you must enter it into recorder which will initiate a request to send video through this universal protocol. You need to open the NVR menu and enter the RTSP command followed by the username and password of the IP camera and upon receiving this information the camera will send a real-time video stream.

Test an IP Camera with the RTSP Protocol using VLC

Before trying to set up a CCTV system it is recommended to make sure everything will work properly and the best way to do this is through simple tests like connecting an IP camera with a traditional software that uses the RTSP protocol. There is a traditional free software called VLC that can be used for such tests. The diagram below shows an example of how to use it.

In this example, an IP camera is connected to the router which in turn is connected to the laptop that uses the VLC software to send the RTSP command to the camera. Everything is on the local network and therefore there is no need for routing rules (the devices are attached to the internal ports).

In the VLC software, just open the “Media> Open Network Stream” menu or type CTRL + N and paste the RTSP command from the IP camera. 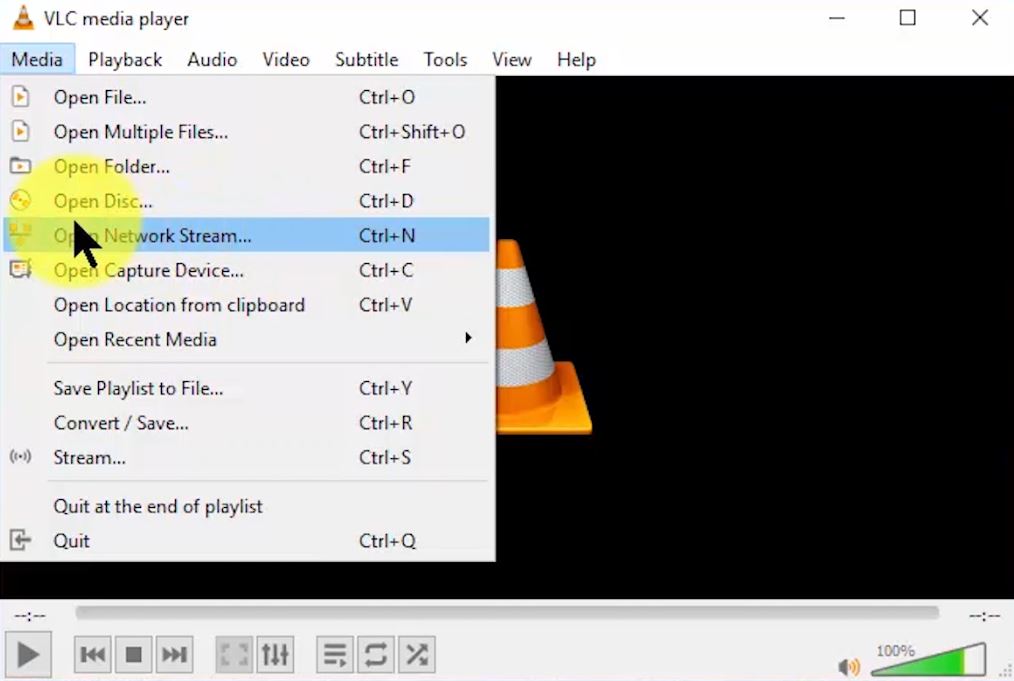 In our example, the IP of the camera is 192.168.2.107 and the RTSP port is 554, this information must be entered in the command that will be sent to the camera. See the example in the image below: 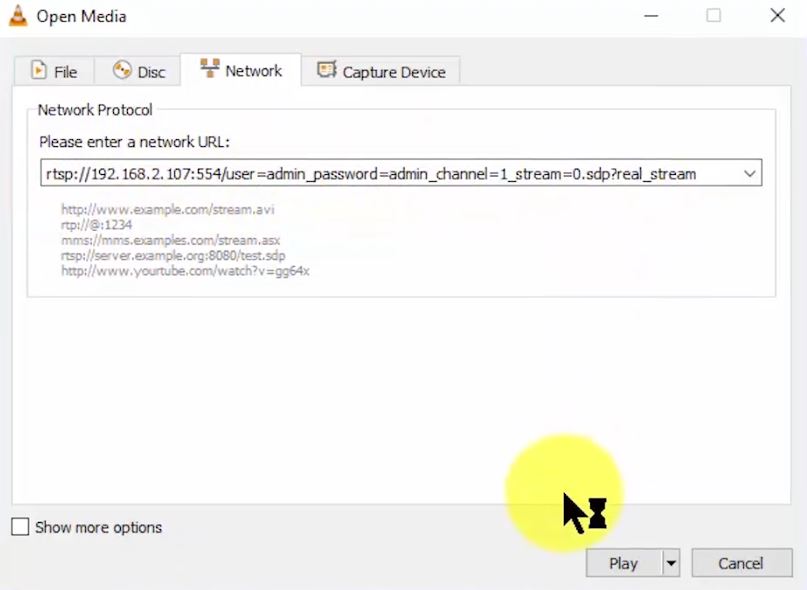 The command in this case is:
rtsp://192.168.2.107:554/user=admin_password=admin_channel=1_stream=0.sdp?real_stream
After sending the command you can see the image of the IP camera directly on the laptop, which proves that the command used is correct and the network connections and IPs are also correct. 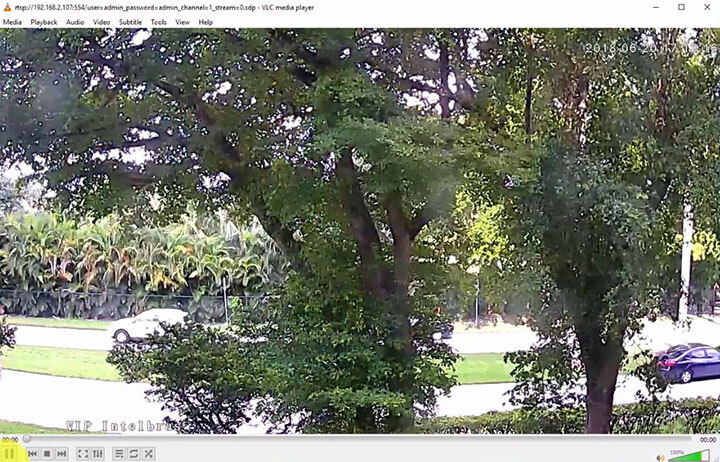 After this initial test, it is possible to move on to more advanced tests and use a remote connection with IP camera recorders or cloud recording systems.

How to find your IP camera’s RTSP command

The simplest way to find the command used by your camera or recorder is to consult the product’s manual, if this is not possible contact your equipment supplier, if you still have problems you may try to use the ONVIF Device Manager software following the instructions from the article ONVIF Device Manager Review. At the same time you can find the RTSP url lists on this article.

Potential Issues with the RTSP protocol

RTSP IP cameras enable users to stream live video feeds on an RTSP compatible players, Windows RTSP player, Chrome, IE web browser, RTSP software, or RTSP Client. However, the convenience of RTSP can lead to serious problems if used improperly. Some IP cameras were hacked and live footage from homes is being streamed or watched by strangers because some IP cameras shares similar RTSP stream URL and some users are forgetful or indiscreet about their username and password. To prevent your IP cameras from being hacked and footage being watched, users need to secure their network.

For example, changing your IP camera account name and creating a strong account password during setup. Besides, if your IP camera is connected to your home router, one way to fend off any potential attack or hacking is to enable WPA2-based encryption.Updating IP camera/NVR firmware on a regular basis helps as well.

How to connect an analog HD PTZ camera to a DVR

How to connect a Hikvision IP camera to a Dahua NVR

How to Set Up 24 Hours or Motion Detection Recording?

How to Install a PoE Camera